I was talking with Robert this morning, the Frenchman who lives a km up Gap road, across from the Bests. He stayed through the fire, with a friend up to help who works in the conservation side of old DSE. They didn’t waste time doing anything more on Robert’s castle, which is impossible to defend, but went up the top of Gap Road to read what was happening with the fires. Then Robert went down to have a closer look in town.

I’d been in East Melbourne, having found out about the fire as Alice and I left a wonderful discussion Moragh and friends near Wonthaggi on Sunday. The cool change has turned the South Gisborne fire around and was heading north and east. We found that the French couple from HelpX who’ve been with us for 10 days were out, in Sunbury, with the fire changed direction. The road had been closed, so they were out of danger.

Robert and I discussed how we’d followed things on radio and TV. We agreed that the coverage was a much better effort, but still completely inadequte. There wasn’t specific information.

“The fire has jumped the road south of Riddellls Creek!” says Channel Whatever.
The CFA site has a fire symbol at the junction of Campbell and the Riddells-Sunbury road.

Excuse me, but which road? The loose use of the Riddells events for a news drama is not enough. A symbol on a map is not fine-grained enough. Give me the polygon.

I wonder if we couldn’t do better for ourselves with a citizens’ Facebook page, for Riddells and surrounds, posting what we see going on. I’ve been impressed by the ability for my Nokia smart phone to send video, stills and text direct to my facebook page, and I wonder how you’d create a netwwork of resident pages, with a shared wall. A question for the smart people at Facebook.

Robert also said he wanted a map on which those occurrences were plotted, as they are on the Emergency Services website. Could we use google maps, as we have in landcare to locate occurrences of cape weed? In conjunction with a facebook site, that could hold observations about fire activity closer to real time, for those of us who live in and around Riddells? A question for the google mapping community. (Around about here in today’s writing, I register the the hyper-alterness that follows a near-brush with a big fire).

There’s a near-term opportunity to get talking between Riddells people and experts about reducing the fuel on Barrm Birrm. How can this be done? When Robert talked about cutting and using as firewood the dead tress fringing Barrm Birrm, I felt a Green Army project coming on, heaven forbid! And, as a chopper runs nearby, there’s the question of how to get the Firesticks Project down here.

Hopefully, the fire will stay where it is, across in the gullies east of Rowsey and Lancefield, and not bother us here, and we’ll be able to go back to our normal lives. In the short-term, I put a call out to the RCL Committee, and Bill Hall, who lives down of the flat, sent through this map of the fire, which he got from the Incident Controller in Gisborne.

Now this is starting to help me understand what was happening, this and Robert’s observation from the top of Gap Road that the 2km front turned into 3 fires with a total 22 kms of front when the SWesterly came in. Around 4:00 the wind shifts around further until it’s coming from slightly S of E, blowing the front directly towards RC. There are approximately 108 appliances + 5 bombers fighting the fire.

And I am in East Melbourne being told by Channel Whatever that fire threatens Riddells Creek. 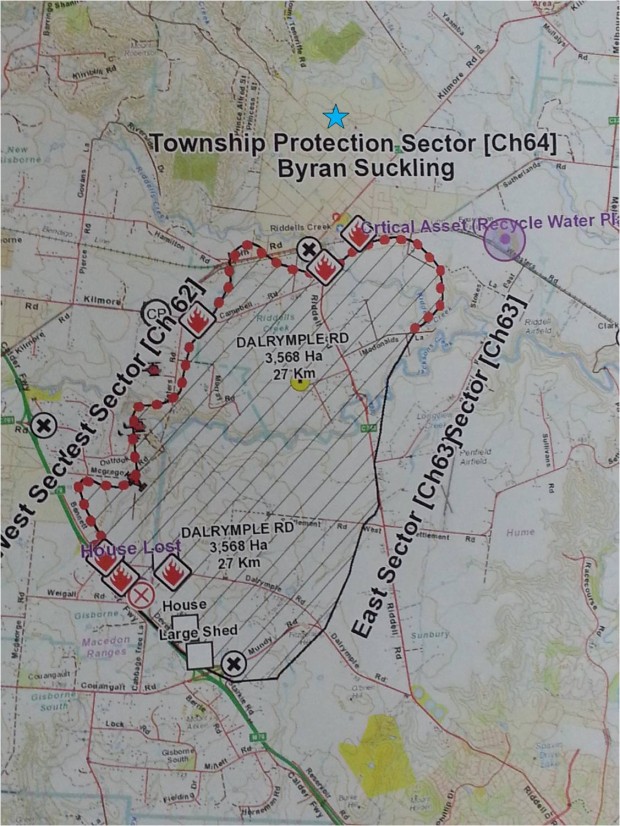