The short answer is faster evolution of culture, that is of behaviour, beliefs and values.

The longer answer is that social inquiry brings wisdom and creativity to evolution, by engaging those who give a damn about each “how we live now” situation. Diversity is difference, and as Bateson observed, it’s difference that remakes understanding. Get those who actually have to deal with situations in the same room, talking, and you’ve got a whole lot of difference. Understandings in each person will shift. Actions will be different.

Somewhere along this path, the choices we face collectively will become clearer. Collective action will become stronger, better integrated across differences, and more creative in the possibilities it takes up.

Social inquiry is a way to articulate the choices in the way we do business around here. Does it serves us? What other ways might we open up?

These thoughts follow an email to a manager this week, in which I suggested that the cultural shift his organisation was seeking, whatever its current formulation, was essentially a shift to inquiry-in-action, between peers. Today’s aspirations for the organisation’s culture (and there are several of them about, as you might imagine) would soon ring hollow unless tested against the reality of what is actually happening in relationships in the organisation. Inquiry between peers is a way to do that. What I didn’t quite get to in my email was Stephen Denning’s imagine that….. Here it is now …… 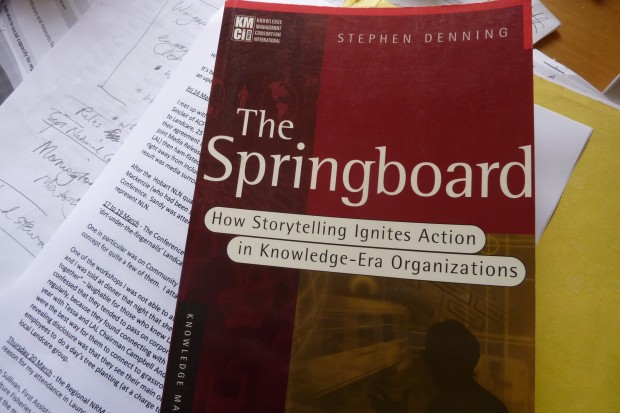 Imagine that you could take issues about the way we do business around here into discussion amongst the innovators in any area of practice, then more broadly between peers.

Imagine that you understood and were trusted enough by the various communities of practice of your part of the organisation to raise matters you were concerned about, and have people listen and consider and discuss those matters.

What might happen? Action toward something new in the culture of your organisation might well be stronger, because people had the knowledge and
commitment of their peers behind them.

Moves towards that mix of responsibility and accountability that makes the organisation work better would be secured in practice.

There would be a readiness to keep thinking, keep testing new practices, bring them back into discussion and contention.

The proposal: social inquiry within communities of practice, building on the forms of dialogue already going on between peers, on matters agreed as to between practitioners and the organisation.

The benefit: collective action that’s stronger, better integrated across necessary differences, more sustained, and more creative in the possibilities it takes up.